Why do bugs die on their back?

When we see a bug or insect lying upside down, we have probably asked ourselves two questions. First, have the bug died because it could not lift itself, or second, whether the insect flipped and lay on its back after it died? The answer to these questions can be controversial sometimes, even among entomologists, with each group favoring their point of view.

Normally cockroaches, palmetto bugs, or other insects will die on their backs.

Many factors can influence the position of insects upon their demise and it definitely raises the question of why do bugs flip over when they die?

The parameters which affect a bug position after death are the cause of death, weight, surface friction, neurotoxin poisoning, and available side support.

I had a personal interest in getting the answers to the above questions. Therefore I tested and concluded some facts that I shared in the blog below. I think you will enjoy knowing them.

Basic Reasons for bugs and cockroaches to die on their back

Dead or dying bugs or roaches usually lie on their back in a familiar pose with legs extended in the air and abdomen facing the sky. This particular position has drawn particular interest among physicists and entomologists alike. I will be trying to explain the reasons for this pose as simply as possible.

Unlike other organisms, insects, including roaches, have exoskeletons to support their bodies and protect internal organs. Therefore, the majority of their body weight is disproportionally distributed externally. This creates an imbalance where the center of gravity always tries to flip the bug.

To answer the question: How do bugs end up on their back?.

Two scenarios need to be explained

The second possible explanation to the position of a dead bug lying on its back can be matched to the bug’s legs. We all know that bugs usually have long legs in proportion to the size of the body.

When a bug dies, the blood supply to the legs decreases, which flexes the legs. The flexion of the legs pushes the bug into a newer position, also called the position of flexion. This newer position is a bug on its back.

A third explanation is that a dying bug, usually intoxicated with a chemical neurotoxin, cannot pull itself up. With its weak muscular and fluttering nervous system, the bug cannot counteract the pull of gravity. The bug dies and stays in this particular position.

Do all bugs die on their back?

Another interesting question that keeps arising in our minds is: Why do insects’ legs fold when they die? This is because the folded legs are the position of rest, when a bug dies the blood flow to the legs stops, which causes them to contract (attaining the position of rest).

Also, note that roaches do not sleep on their back, rather they will sleep in a straight normal state. Where Do Roaches Come From? How to Identify Smoky Brown Cockroach [SURE signs] 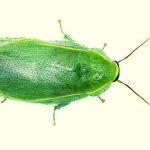 Cuban Cockroach (Is IT a TYPE?) How to dispose of a Cockroach?