Insects, including roaches when squashed or physically killed, do not bleed red. Instead, a stenchy colorless to yellow fluid appears on the surface that attracts more roaches towards itself. This colorless fluid is why you don’t see a cockroach bleeding to death.

Unlike humans, cockroaches have an open circulatory system. This means that the blood or endolymph directly baths the cells to carry nutrients and waste without carrying oxygen. This circulatory system is not as animals have (Reference). Let’s jump into its detail.

Does a cockroach have white blood?

Hemoglobin is a protein with red color that transports oxygen to the cells and carries carbon dioxide away from the cells (Reference).

The blood of cockroaches is called hemolymph and does not contain hemoglobin.

Instead, it contains three types of cells,

The lack of hemoglobin makes the cockroach’s blood colorless or slightly yellowish.

Do you know how long can a Cockroach live without its Head? Read this article to know the answers.

Why there is no blood in cockroach?

The insects, including roaches, have a well-designed respiratory system that carries oxygen to each cell without needing a transport medium such as blood. This system is called the tracheal system.

Although this makes them quite unique and less dependent, it is a less efficient system.

This is the reason when you squash a cockroach, you see no blood.

A cockroach can run at incredible speed of up to 3.5 miles an hour. Click the link to know more.

Cockroaches are omnivorous and are known to feed on a variety of things including rotting plant leaves and garbage, starchy food, and meat. Moreover, the cockroaches are attracted to strong-smelling foods including peanut butter (Reference).

The blood emits a strong smell that attracts a variety of insects including fleas and roaches. That is why roaches love to eat blood and usually cluster on bins containing fresh meat.

Cockroaches are the timidest creatures that usually avoid the site of humans and other predators. They are known to be most active during the night when it’s dark and silent. At night cockroaches come out to feed on spilled food and rotting items in the bins.

On the other hand, Bed bugs have two maxillary stylets that they use to suck human blood. Whereas, cockroaches lack any of these blood-sucking structures (Reference).

That is why, Unlike bed bugs that drink human blood, Cockroaches avoid biting humans and never stay long enough attached to the human body to drink blood.

As explained earlier, cockroaches do not contain blood; instead, they have hemolymph that transports nutrients and waste across the body.

That is why cockroaches never bleed red, instead, they do technically bleed but the bleeding is colorless.

Do roaches have hearts?

Yes, cockroaches have a single heart which is divided into 13 chambers. It is a tubular shape like a rod with multiple chambers. If the heart stops, a cockroach won’t die immediately but will eventually die.

Like other insects, cockroaches have an open circulatory system that consists of a primitive heart-like structure and a major blood vessel called the aorta. The aorta opens into ill-defined and very simple vascular channels and spaces called sinuses.

It is important to know that cockroaches do not have blood as a circulatory fluid. Instead, they have a yellowish to transparent transport fluid called endolymph. 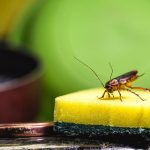 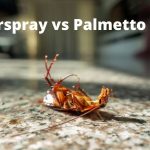 Can Roaches see in the Dark? Does Pine Sol Attract Ants? [No, But…]