A typical US household is more likely to be infested with a cockroach, like a palmetto bug, than a water bug. Although they may look similar, differentiating them is pretty easy because of many differences.

Interestingly, both are part of Insecta but are grouped differently (Palmetto Bug under order Blattodea whereas water bug Hemiptera).

Water bugs are outdoor species with more significant and flatter bodies than palmetto bugs; they have two legs and much shorter antennas sitting under the eyes. Unlike dark brown palmetto bugs, they have a greyish color and yellow stripes behind the head. Water bugs love to live near water bodies and prey on other aquatic animals.

Here are 15 differences between the Palmetto Bug and waterbug with pictures, including their origin, size & color, habitat, feeding habits, and ways of reproduction.

The bite can be painful but is devoid of any severe consequences. After going through the blog below, I am convinced you will quickly differentiate between water bugs and palmetto bugs.

Although the origin of palmetto bugs can be traced back to tropical climates of Africa, Floridians named them palmetto bugs due to their close association with palm trees.

On the other hand, water bugs are thought to be originated from the black and Caspian seas (some biologists associate them with Russia and Africa).

2. Size and Color of Water Bug vs. Palmetto Bug

There is a marked variation in size and color among different types of palmetto bugs. Adult bugs can range from 28mm up to 53mm. The color also varies from light to smokey and dark brown.

In contrast, water bugs are flatter, with large sizes ranging from 50mm to 100mm. The color of the water bug is more tilted towards a greyish hue. Moreover, a strip of yellow markings usually covers the area behind the head.

Palmetto bugs and water bugs both love to live outdoors. Whereas both can infest homes, water bugs will very rarely do so. Palmetto Bugs love warm and humid environments and are usually located inside bathrooms, garbage, basements, and food storage cabinets.

However, german palmetto bugs can severely infest homes as they love living indoors.

On the other hand, as the name suggests, water bugs are located near water bodies like lakes, ponds, and streams. They can survive underwater for many hours, thanks to their air storage capabilities.

5. What does Water Bug Eat?

Palmetto Bugs, including palmetto bugs, are omnivorous and feed on leaves outdoors. Inside the home, they live on leftovers, including garbage, fruits, and pieces of bread. Besides these, palmetto bugs love to eat starchy foods, mainly bakery items.

On the other hand, water bugs are picky and usually prey on fishes, amphibians, and aquatic insects. They release a powerful enzyme that can paralyze the prey.

Reproduction is the cornerstone for the survival of species. Palmetto Bugs prefer to reproduce in the late humid summer season. An adult female palmetto bug lays eggs 55 days after mating. The baby palmetto bugs undergo molting to transform into eggs.

It is pretty interesting to know that male and female water bugs actively participate in reproduction. Once the female bug finds an appropriate male partner, she mates and lays eggs on the wing of the male bug after 55 days. The male then takes care of the eggs and periodically visits water to prevent the eggs from drying out.

The eggs hatch after 45 days, and the larva is born. The larva undergoes five staged metamorphoses before transforming into an adult water bug.

7. Life Span of a Water Bug vs. Palmetto Bugs

Interestingly, male palmetto bugs have a shorter life span than female bugs by up to 3 months. The life cycle of palmetto bugs is, on average, two years. This can vary between different environments and places. A palmetto bug’s life span also depends on the availability of food and water. You can read more on how long does a palmetto bug lives? Here.

Although an adult water bug has a similar life span to a palmetto bug, the life span from eggs to death is shorter by up to 6 months. This is because the nymphal stage in water bugs is shorter, with only 4 to 5 molts taking almost 2 to 3 months to transform into adult bugs.

8. How do water bugs Communicate?

Regarding communication, palmetto bugs have a complex organized method of communicating with each other. This is achieved through a variety of chemical odors called pheromones. The composition of these pheromones changes according to the message. They can pass information about food, danger, and mating.

The water bugs communicate with their colony through water ripples, known as ripple communication. The verticle oscillation of the legs creates a cascade of waves that another member picks up. The water bug can transmit messages, including food, mating danger, and territorial guarding (Source).

Palmetto Bugs don’t fly regularly; when they do, they mostly glide for a short distance. Some palmetto bugs are heavy enough that they are intrinsically designed to crawl. Palmetto Bugs fly in case of imminent threat and only when the conditions are ideal.

Likewise, not all palmetto bugs fly; only adult Smokybrown and American cockroaches can fly. The Florida Wood cockroach doesn’t have wings and can’t fly. Please read more on ” Can a Palmetto Bug Fly? ” here.

Water bugs, on the other hand, are good flyers. They have two sets of wings, one larger and darker than the other. They usually fly during the late humid summer months, when it’s ideal for mating.

The water bug flies from one water body to another. They can fly 30 to 50 meters in one go. Like other insects, water bugs are attracted to bright lights, and you can occasionally see them flying toward the light sources.

1. To act as an emergency escape system from a threat, and
2. To serve as a signaling mechanism, informing the colony about an imminent threat.

Florida wood cockroach species of Palmetto bug spray a foul-smelling liquid on the prey, which acts as an irritant and a signal. It is essential to know that palmetto bugs have a limited juice supply; it takes three months to refill.

On the other hand, when they feel threatened, water bugs can play dead or even bite. The bite is a powerful defense mechanism that paralyzes the prey or elicits a painful response from predators, including humans. They can also emit unpleasant odors from their anus, which wards off predators.

Palmetto bugs produce eggs 55 days after mating and hatches after 45 days. The eggs are encased in a light brown sac called ootheca. Interestingly, ootheca is visible to the naked human eye and measures a few millimeters.

Female Water bug lays eggs in batches of 100 plus eggs. The eggs are creamy colored and resemble the seeds of the sunflower. Some water bugs lay on the green vegetation while others on the back of the male partner.

The selection of place depends on the species of water bugs. It just takes two weeks for the eggs to hatch.

Palmetto Bugs can multiply quickly. An adult female Palmetto Bug keeps producing an ootheca (Containing approximately 15 individual eggs) every month for the rest of its life.

At the end of her life, she will have given rise to approximately 120 to 180 offspring. Since palmetto bugs live in hidings, their survival rate is high.

One study produced the highest number of eggs (420) at 24 degrees Celcius (Source). The eggs on the back of the male partner are most likely to hatch with a 97% probability.

The survival rate of water bug babies is low due to their diet or being prayed by other animals.

Roaches, like other palmetto bugs, scavenge on rotting food and leaves. They are almost innocent when it comes to biting humans. This does not mean that they are not able to bite.

They can and do bite sometimes when disturbed. The bite is trivial, primarily with very few cases of severe pain. You can read more on Do Palmetto Bugs Bite? Here.

Likewise, Water bugs are scavengers and are known to bite. They also can bite humans, but only when they feel threatened. They bite with the help of proboscis and mouthpiece, injecting a powerful enzyme that can liquefy host tissue and paralyzes their prey.

Their bite is mostly not dangerous to humans but can sometimes cause pain and severe allergic reaction, requiring medical consultation.

They are also known to elicit allergic asthmatic attacks in atopic people. The cause for allergic reaction is mainly the pieces of exoskeleton molt. Learn more about: Are Palmetto Bugs Dangerous?

Water bugs are known as toe biters. Their saliva is usually non-toxic to humans, but their bite can cause immense pain or sometimes even cause a complete or partial loss of sensation in the bitten area (hypoesthesia).

Although it is usually thought that water bugs do not transmit any disease, a recent study in West Africa Concluded that they might cause Buruli Ulcer (Caused by Mycobacterium Ulcerans, whose incidence is increasing steadily) (Source).

Although recent advances in chemical pesticides have proven disastrous for palmetto bugs, eliminating palmetto bugs can pose some serious challenges. Boric acid, chemical sprays, and bait traps are lethal to palmetto bugs. You can also use natural palmetto bug repellents to ward them off without squashing them to death. Should I kill a cockroach? What Smell Do German Roaches Hate? [But, Not FOREVER!] What to do if you Find a Cockroach in your Food? 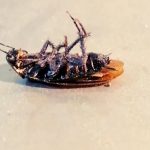 Are cockroaches Asexual? (Not WHAT You Think!) Can Cockroach Survive a Nuke? How to Get Rid of Roach Smell in Your House?